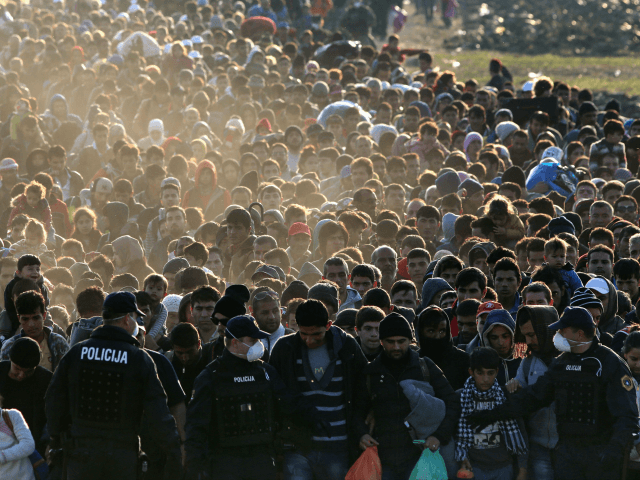 Despite the common belief that migrants only fled war zones, Reader and Social Expert Alisha Holland claimed that migrants were affected by various other factors.

In the light of what happened during the past few years, Reader and Social Expert Alisha Holland presented a lecture last Tuesday on “The Migrant Wave” at the Issam Fares Institute, located at the American University of Beirut.The lecturer explained the reasons and the consequences behind the wave of migrants, and she also corrected some misconceptions people had regarding these migrants.

“[A migrant wave] is a sharp increase in the rate of migration to a given receiving country or a region that then returns to pre-existing levels.” With this quote Holland started her lecture and clarified that migrants are different from refugees. The social expert further explained the three main reasons which caused the migrant waves.

The first and most acknowledged reason of the migrant wave was war and violence. People in war zones such as Syria or Iraq could not afford to think whether they should leave or not. Migrating was their primary option to stay safe. But fleeing at any cost had as well its consequences. Sometimes, the migrants came across smugglers who pretended to help them but brought them illegally to other countries. The second factor is a psychological one known as the Herd behavior. This contagious behavior is caused by the nature of human which tends to always imitate others. Those who had social networks in other countries were more likely to be affected by the Herd behavior, especially if they saw how good the other members were doing there. Past migrations made new ones much easier because people have already found jobs and houses in their new country. The third motive was that people who did not live in conflict zones sought to improve their lives on many levels. These migrants are combined under the movement of secondary migration decisions. These people did their research to find the right opportunity and flee to the new country. The reasons are usually related to economics, and the process of fleeing required thinking, time, and a good social network.

In addition, it might be a common belief to think that migrants were illiterate or uneducated. Holland clarified that migrants from conflict zones were aware of what kind of country they were heading to. The methods used to evaluate the focus groups showed that the migrants in Turkey or Jordan knew with a percentage of 98% who was the Chancellor of Germany. That proved that on the contrary to common beliefs, their level of general knowledge was above average. They knew what was happening and tried to analyze and to understand. This meant that there were political causes of migration related to the International and Migration Politics. Policy changing led to information seeking. Therefore, as Holland claimed “Migrants, thinking about making this choice on which their families’ life is going to depend, will learn about policy and politics.”

The informational dynamics in migration clarified why people only migrate to some places. “people’s incentive to invested information depends on the stakes of the choice that they’re making.”. Migrant policies of certain countries were what drew ways of people who wanted to change their future. Cumulative or chain migrations was manifested when a country saw a rise in the number of migrant coming but no sharp start or sharp end. These movements or decisions also happened in Central America, El Salvador for example, where there was no fighting. The mass movements communities payed attention to the news and to the change of policies. The world witnessed a big spike around September 2015 and then it collapsed. When European policy was changed, people not only from Iraq and Syria, but also from Nigeria and many other countries accelerated their research to migrate.